After midnight, Lena (37) scared and fleeing, meets Genti (11) in an underpass at the center of the city. After they get to know each other, they talk about the reasons of them being there. Lena claims she is waiting for her husband to pick her up, while Genti is waiting for his father. Afterwards the conversation shifts to their respective head wounds. Genti says his injury was an accident caused by his father, while Lena’s was an accident caused by her husband during their vacation in Venice. 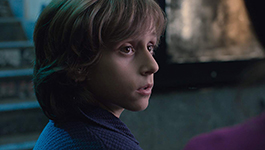 Born in 1986 in Ferizaj, Republic of Kosovo, Studied in University of Prishtina, Faculty of Arts – Film and TV Directing. He has worked as writer, director, cinematographer and editor in the biggest film company in Kosova, and in these last years in his own company Figurina Film’s He has worked also as Theatre Director in Prishtina and Ferizaj, where he made 6 plays and 3 performances. Living in Ferizaj and Prishtina. Awarded films: Obssesion, Era, The Eaters, Woman in Black, Who is next, Beyond the Gates, Marihuana Republic, Forgive me.